Is a Stein-Sanders Ticket a Fairy Tale?

once upon a time, there were two progressives who wanted to beat the big bad wolf and the evil witch…

So I’ve been learning more and more about the Green Party Presidential Candidate hopeful, Jill Stein, and she seems pretty great.

She recently wrote an open letter to Senator Sanders, in which she applauds his campaign’s progressive agenda, his “inspiring grassroots movement”, and makes note of the unfair attacks from the establishment and media against him. She ends the letter by inviting him to speak with her about “collaborative ways to advance the effort and ensure the revolution for people, planet, and peace will prevail”.  Sanders still hasn’t responded to this invitation, but I’m curious if he might after the DNC in Philadelphia hands over the nomination to Clinton. Sanders campaign has demonstrated a sense of integrity since the beginning- and since Sanders promised supporters he would take his campaign all the way to the convention, I believe he will do so, and that this might be delaying him from speaking with Stein.

I mean, is this a crazy thought? Would it be impossible for a Stein-Sanders ticket to materialize? I don’t think so. This could be a way to get around the outdated, bought and sold, two party system and start a real revolution of the people. Sanders has said that he will not run as a third party candidate, but he never said (to my knowledge) that he wouldn’t accept a running partner position.

This would cause an even bigger problem than the DNC is worried about now with the #StillBernie and the #BernieorBust movement. These diehards would certainly give their support to a Stein-Sanders ticket, and people who are on the fence about who to vote for if the options are Clinton-Trump (meaning, do I write in Sanders? or compromise to vote against my own convictions and choose the lesser evil, which arguably is Clinton), such as myself, would be so relieved to see this ticket as a viable option.

There are still things that Stein needs to accomplish before she can seriously think about getting Sanders on her side. She still needs to get on the ballot for a lot of states, including PA. If she hopes to gain media attention and be invited to debates, she will have to receive at least 15% of the electoral vote which can be difficult if she doesn’t have Sanders supporters already.

So for all you naysayers, just let me have this daydream. I don’t want to give up on the hard work I, and so many of my new friends, have done for the Sanders campaign. If I allow myself to give up on my own ideology, then ultimately the entire establishment has won.

I’ve wanted to write about John McAfee for a while, but ironically enough, my computer has been out of commission for the past month because of a corrupt file when downloading McAfee virus protection. This isn’t John McAfee’s fault, he sold the company years ago. He’s the first to criticize the software that bears his name,  calling it garbage since he sold it over 20 years ago. I have to agree with him on this. 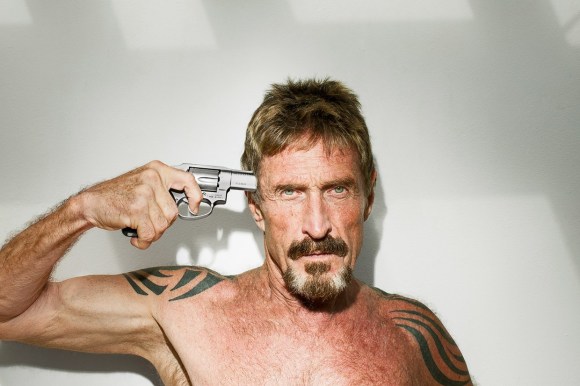 John McAfee displaying how I felt when the company he no longer owns, but created 20 years ago, really fucked up my computer last month.

ANYWAYS, I was first introduced to John McAfee when I was researching the iPhone San Bernardino case. The first interview I watched was this, on RT News-and I totally recommend it as a starter as an introduction to his ideologies and character. He strongly defends Apple, explaining that a “backdoor” that Apple would have to create to unlock the phone would cause a way for hackers to get into phones. McAfee’s definition of hackers isn’t defined as the 15 year old kid who hacked into top secret FBI files in February, or the 16 year old who hacked into the personal email account of the head of the CIA.  When John McAfee talks about hackers, he’s talking about the government.

When John McAfee speaks about cyber security he does so with an air of confidence, truthfulness, and callous. He rivals Trump on outrageousness (watch that link, it’s not anything that you think its going to be… seriously. oh and he may have murdered a man) but has the alternative congeniality that could certainly gain him Bernie supporters. However, anyone who argues that they’re not afraid of the government seeing all of their internet activity (the “why does it matter if I’m not doing anything wrong?” people) may hear McAfee’s rhetoric as Orwellian as he describes the dystopia that giving up privacy for security will cause. He’s pretty persuasive though, and I think if he’s able to get his message out, more people will understand the risk that giving up our right to privacy is.

I agree with McAfee on a lot of issues, which I tend to do so with many libertarian views. I’m wondering how he might mess up the Democratic Party too now that he is finally be recognized as a presidential candidate. The Hill posted this “campaign ad” today… which will definitely start to help gain him attention. He’s certainly an alternative to Trump and Clinton. What I wonder about is how many Sanders’ supporters he will gain (that is, if Sanders’ doesn’t get the dem nomination). The Democratic Party could really be fucked then, with the #StillBernie crew pledging their allegiance in the general election and McAfee possibly persuading even more young dems for his vote.

Who knows. There’s a lot to come. But, I wouldn’t be surprised if McAfee’s name becomes household before November… at least I hope it does.